Pre-school has begun again for our little guy and I am so excited to share this new experience with you. As you know from my previous blog, we were excited to have the little man try out school in Sweden. While the teachers in our last school were AWESOME, we wanted to find a school closer to home and also one where the students were primarily Swedish. The logic behind this is that if we stay in Sweden long term, the short one will need to be fluent in Svenska. Thus began the search for a new school. I applied to many schools, a few local public schools, and several cooperatives. The one I was most excited about was a Montessori cooperative. Those of you familiar with the Montessori pedagogy know that the emphasis is on helping children to develop their life skills through self-guided play (massive simplification, I know). Needless to say, my fingers were crossed. A couple of months passed while we waited to be notified about school, but finally we found out there was availability in three of the schools we had contacted. Two we were very excited about and those two were narrowed to one after we considered ease of commute.

That is how just three weeks ago I found myself bringing the little man for his first day of Montessori pre-school in a primarily Svenska speaking school. It was such a good decision. Not only is this a Montessori pre-school, it also has a huge outdoor play area with a giant sand pit, vegetable and flower gardens, and even a little play house. Indoors, the children are separated by age into three distinct classrooms that only mingle when outdoors (a big plus for my little guy who doesn’t always enjoy the company of the littlest children). The teachers are lovely, and the students are most definitely the nicest group of kids I have come across.

Each week, the children will be going on a hike in the nearby woods with their teachers. They also take walks around the neighborhood, visit local museums and theaters, and eat some amazing, freshly prepared meals. Yesterday when I arrived they were eating apple sauce they made with apples foraged from a local yard (freely given by the homeowner) and today they had sandwiches made on freshly made bread rolls by the awesome cook who prepares tasty meals each day. My experience with the food at both the previous school and this current school is that the quality is so much higher than what I was accustomed to back home. As someone who has been sick and disinclined to make strongly flavorful foods for the past few months, it is wonderful to know that my child is eating things like freshly prepared salmon cakes and homemade stews during his school day.

This school is a cooperative in addition to being Montessori, which means that we as parents have a responsibility to assist with the smooth running of the school. There are cleaning duties, committee duties, and in general an expectation that we will be active in the goings on at the school. While this can be daunting for some, in a place like Sweden, where parental leave is generous, and people work to live rather than live to work, it is completely reasonable. It’s not all work though, in addition to those responsibilities come certain privileges. After picking up children from school, it’s not unheard of for parents to stick around and play on the playground out back with the children. I wouldn’t even have considered this at our previous school, as the playground was in the middle of an apartment complex and I felt it would be impolite to stick around. Since this playground belongs to the school, it makes perfect sense to let the children continue playing and to join in ourselves.

My biggest concern joining this school was that my limited Svenska would be problematic for the other parents. Thus far, my fears have proven completely unfounded. The parents are friendly and inclusive, some have even been helping me to add to my Svenska vocabulary bit by bit. One mom even made me a homemade natural deodorant that is much better than the store bought one I’ve been using. My other concern was that my son would have trouble adjusting to being the only English speaking child. That concern turned out to be entirely unfounded. The other children have completely accepted him and gone out of there way to include him in their play. Hopefully eventually he will even be able to understand what they are saying. 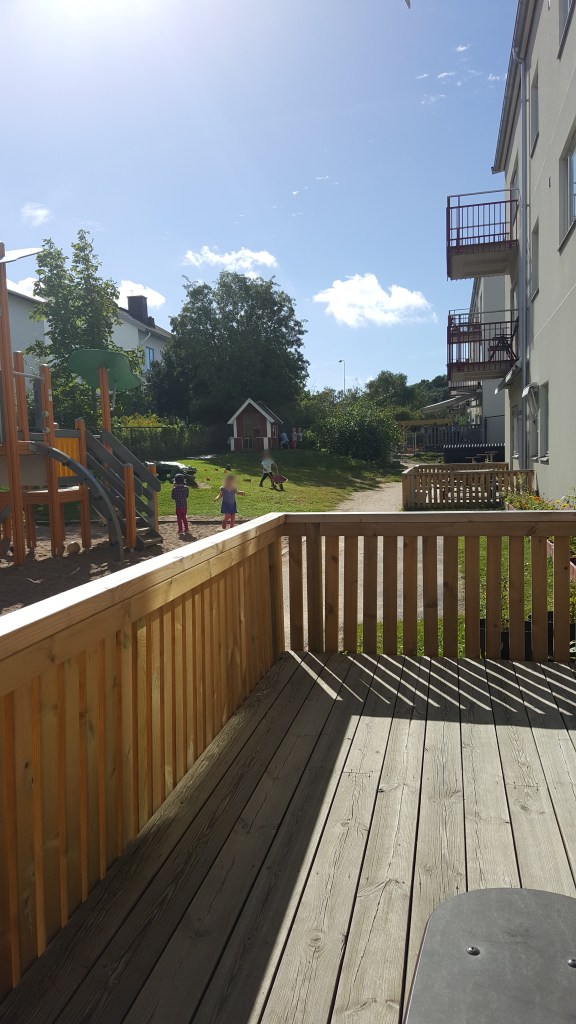