Growing up, I did not pay attention to the meaning of May Day. Mainly, it was just my Grandma’s birthday. I knew flowers were involved and had heard about a May Pole (whatever that is…). Sadly, this trend continued my entire life. Part of this ignorance is my own fault and part is due to the fact that it never really interfered with my life. I’m sure there were events and parades and what have you, but I was completely oblivious to them.

This past weekend, May Day smacked me in the face.  After a long walk through Slottskogan in new shoes (a blog for another day), my feet ached.  I was desperate to hop on a tram, get home, and change shoes.  Altogether, I expected a walk of about one kilometer.  As we passed tram stop after tram stop that were closed to traffic, I realized  that wasn’t one bit realistic.  After about two kilometers, just ahead, we heard drumming.  Loud drumming!  Then shouts and chanting.  Finally, at Järntorget, we saw a huge crowd gathered.  Signs were waving about as drummers beat on drums and people shouted through a megaphone.  Oh no!  Was this another closed stop?  Thankfully, no.  It was open, but only one half was functioning.  As we passed through, I saw the signs and realized this was a May Day demonstration.  Suddenly, I found myself very curious about this day and the fervor of the people gathered. 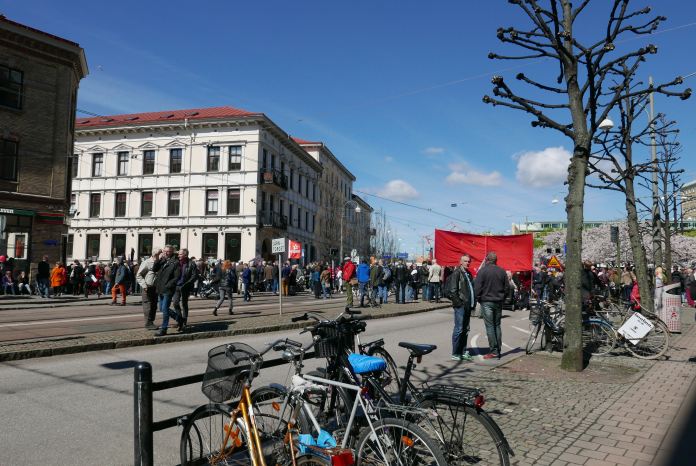 Thanks to the power of the internet, I now know at least a little more.  I found this site very useful.  Reading it reminded me of the information I learned in my AP Civics class about the abominable working conditions in the 19th century and also reminded me of the struggles our forefathers and mothers suffered to unionize.  I’ve always worked within the confines of a labor union.  I won’t say there aren’t arguments against them, but I truly believe that without them, we would rapidly degenerate into a society that once again treats people as disposable goods. Checks and balances are needed to ensure employers do not ignore the need for at least some balance in workers’ lives.  As the linked article states, “Workers had seen first-hand that Capitalism benefited only their bosses, trading workers’ lives for profit.”

I remember at my first job, in addition to the state labor laws that ensured 8 hours off between shifts and minors leaving work by 10pm, the Union bylaws ensured medical and dental insurance and protections for employees against unfair termination. The same was true in my former career, though because it was a federal position, the rules were even more strict.

Enough about me though, according to the article, the first May Day was celebrated on May 1, 1886 when more than 300,000 workers in 13,000 businesses across the United States walked off their jobs.  Did you read that correctly?  That’s right, just 120 years ago in the United States, May Day came into being.  This is our legacy. The United States declared independence on July 4, 1776.  There are houses in Sweden older than our country.  Yet somehow, even though we were a young country, we banded together to do something great.  Despite that, during my formative years, it really didn’t have much of an impact.  I found this article by Paul Hogarth, that supports my own recollection and helped me to accept that I wasn’t imagining it.  Mr. Hogarth explains:

“In 1894, after the Pullman Strike (which also happened in Chicago), President Grover Cleveland made Labor Day — the first Monday in September — a national holiday. Labor Day was chosen to intentionally co-opt May Day, because they feared commemorating the Haymarket Riot would build support for communism and other radical causes. In 1958 during the McCarthy Era, President Dwight Eisenhower took it even further by signing a law making May 1st Loyalty Day. And in the 1980s, President Ronald Reagan enacted May 1st as “Law Day.””

Things may be different in the States than they were when I left just over two years ago.  I read today that there were riots and violence in many places on May Day, so it is being recognized to some extent.  However, that type of behavior is unacceptable to me.  Growing up, it would have made me scared of the day and discouraged me from participating.  The demonstration here in Göteborg that I witnessed was completely peaceful.  Children and adults of all ages, able bodied and disabled, all participated.  They had no reason to fear their fellow demonstrators. 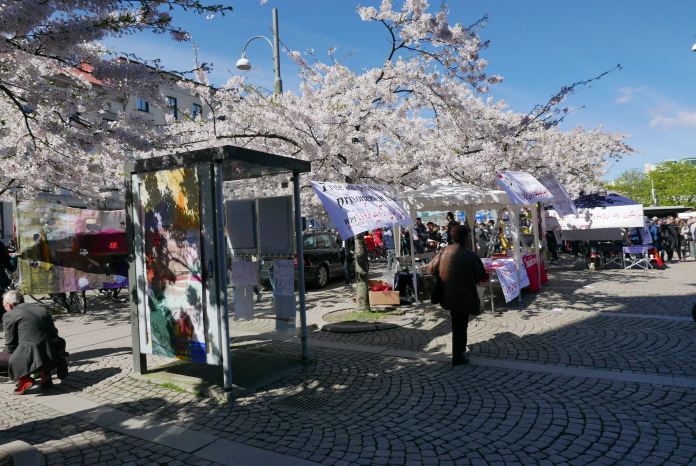 It’s true, as a Socialist country, Swedish citizens feel strongly about equality and fairness for workers. They also wholeheartedly recognize this important day. Yes, the celebrations which preceded the modern day May Day did involve May Poles and flower garlands, but the spirit of that first workers’ rights demonstration is so much more impactful for modern citizens than a Pagan holiday (no offense friendly Pagan and Wiccan readers, I still love you).

Not all battles require a military and not all wars occur in distant lands.

Despite my sore and blistered feet that were too swollen to squeeze into my usual shoes the next day, I’m very thankful for that demonstration. It reminded me of the good that came from my country and the importance of never forgetting the lives sacrificed to ensure my freedom. Not all battles require a military and not all wars occur in distant lands. It is the responsibility of the people to ensure equitable treatment. Hopefully this blog will travel to some other soul who really didn’t understand the importance of May 1st. If that person takes the time to read the links and then looks deeper, that’s even better.

Thank you for reading. Don’t forget, fair treatment of workers is not just a Socialist concept. It’s a basic human right. 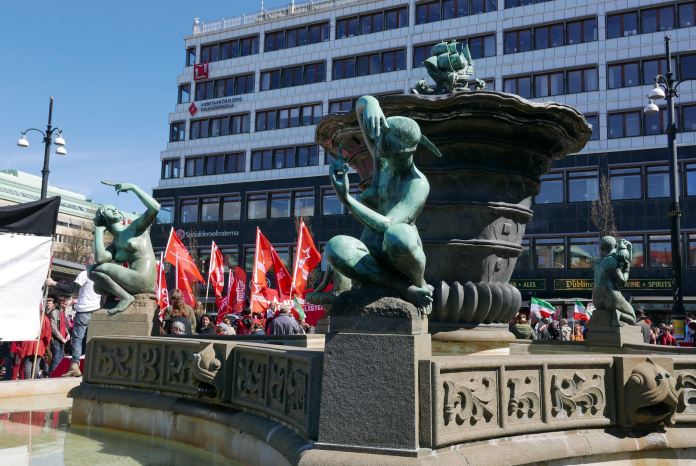