Growing up, I remember sex being a very embarrassing word. Until my early 20’s, it was a word I rarely used aloud. As I aged, it became a lot easier, but since it only referred to gender or intimate relations, there was no need to use it much. My experience isn’t unusual for someone in the US; a country where sex education is in many places now focused on abstinence only. Our puritanical roots show through in times like this.

Swedes view sex, the word anyway, much differently than we Americans. Imagine my surprise when I bought my son a counting book and read:

Huh?!?  Sex??  In a children’s book???  That’s right.  Sex in Sweden is a word children use every day.  Sex in Sweden means “six”.  Strange, eh?  I think I’ve mentioned before in this blog that Swedes use English in ways that Americans would never consider.

Okay then, no reason to be embarrassed when my toddler is shouting out his numbers on the tram. After all, sex is a perfectly innocent word in Sweden. Or is it?

In researching this further, I found out this isn’t the whole story. Sex doesn’t only mean six in Svenska. It also means sex, as in copulation. What?!? Are you surprised right now? Perhaps I shouldn’t have been, but I was dumbfounded. 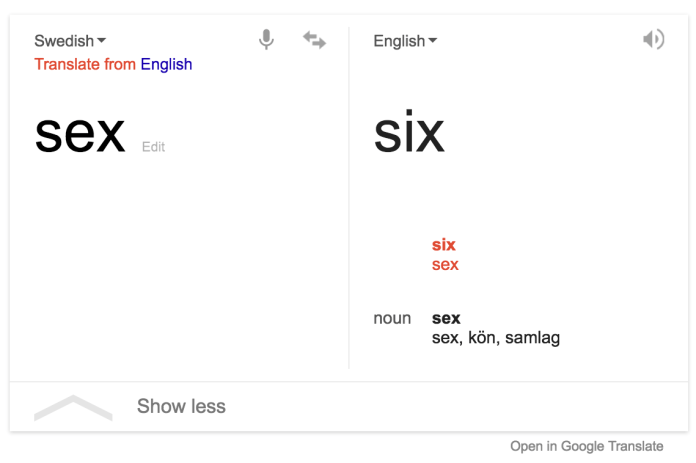 Just in case you want to practice your Svenska, I will close all the numbers from one to ten: