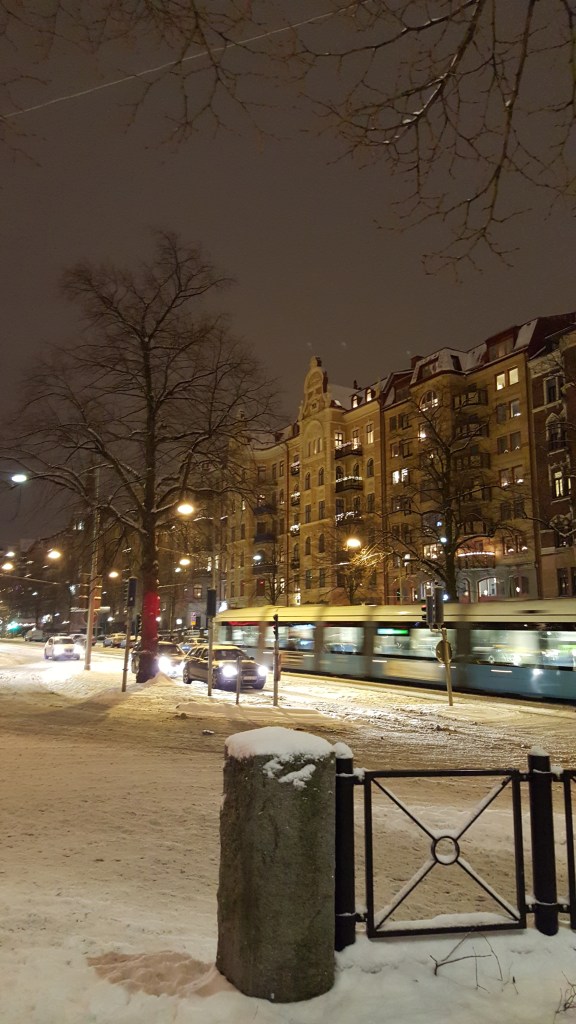 While riding into town one day, my tram slammed to an unexpected stop. The two tram cars and all the riders within lurched backward and forward, some riders nearly falling to the floor. The cause of this sudden disturbance? A very old man decided he could outrun a tram. As I saw him skip across the last tram track and heave his walker up on to the sidewalk, I couldn’t help but grin. This cheeky fellow is a perfect example of the average over 70 in Göteborg.

Public transportation in Göteborg is a melting pot of nationalities, income levels, and ages. The youngest I’ve seen? 1 day…my own newborn. The oldest? I swear he had to have been 90. Today I want to focus on the older generation using trams and buses in Göteborg. Walkers, canes, and wheelchairs are everywhere. Older people are just as active and adventurous in Göteborg as the younger generation. Not only are they physically present, they also interact heavily with their fellow riders.

Older Swedish men (in my experience) are both hilarious and polite. If my baby’s hat falls or my son drops his toy, they often come to the rescue with twinkling eyes. These same men will readily scold a child for chasing the birds. They are friendly with but firm. Just the other day, my daughter amused herself yanking on the finger and nose of a particularly dour looking older fellow. She thought his scruffy cheeks and papery skin were the best thing ever. He played along, letting her have her way for the entirety of his tram ride. They parted reluctantly at our mutual stop…after 15 minutes of silliness.

Older Swedish women are outspoken and equal parts helpful and ornery. The beauty of these women is their lack of fear. They know their rights and are unafraid to speak up. They are hilarious and a little bit scary. As someone without a car, I spend time each day on trams and buses. One day, I boarded a standing room only tram while baby-wearing. Two seated youths were focused on their phones and didn’t notice me; other nearby passengers avoided eye contact. Thankfully, a 20-something woman offered me her window seat. After she moved towards the door, an older (70+) Swedish woman began to address me, loudly, over the head of the man in the seat to my right. I explained my limited svenska and she switched to english. Still loud, she bemoaned that men and youth are so rude these days that they won’t even move for a woman with a baby strapped to her chest. The man next to me was visibly uncomfortable and the youths in front finally tuned in. I was amused and impressed with her gumption. At the next stop, the youths jumped up to allow another person a seat and the man next to me hopped off.

Three weeks later, I boarded a bus and sat in the section for people with limited mobility when I saw no further seats available. Having a baby strapped on my chest and a sleepy toddler at my hip certainly qualifies me for that section. The man across from me had one leg, crutches, and a backpack in the adjoining seat. An older woman approached and asked him to move his bag. He told her to make me move to the buggy/wheelchair section. She scolded him and pointed out the baby on my chest and my young son. She got louder as he continually refused. I began to stand and she brusquely ordered me back to my seat while heading to the buggy section. Just as she arrived, a man in an automatic wheelchair boarded the bus. She came back to our section and demanded that bag be moved. He moved it. She sat. All was well with the world.

These scenarios perfectly illustrate the personality of many older Swedish women. They are powerful, outspoken, and occasionally a bit cranky (they won’t hesitate to tell you off for having feet on the seats). At the same time, even the most impressively coifed older woman will smile at my baby and allow her to touch their jackets or play with their fingers. As someone who appreciates slightly cranky people, I am quite enamored of these women. And yes, they have also taken me to task when they felt I was deserving of the scolding (I probably was…).

Obviously, not all older people in Sweden fit these descriptions. Some are quite ornery and others are visibly uncomfortable with the cultural melting pot they find themselves inhabiting. However, in my experience the majority are good people, living life to the fullest.

To those Swedes who bemoan their cranky older generation, I encourage you to sit back and enjoy the show. Some day you too can take others to task and live while testing the limits of the trams’ brakes and drivers’ reflexes.