Oh ice cream, how I adore you, and hate you at the same time…to the point that I haven’t had an ice cream cone in over a year.

Is it the inches you add to my butt and thighs?  Pah!  I could care less if it means indulging in a tasty treat.

If not calories and fat, why avoid such an amazingly delicious thing as ice cream?  Well world, one day, several years ago, my doctor was kind enough to point out a dairy allergy. No, I am not lactose intolerant. No, I do not have IBS. No, I am not one of those hipsters who only likes soy. Yes, I am indeed ALLERGIC to milk. Those of you who know my family know this to be a travesty. My mother believes milk and bananas will cure all ills. She presses at least one large glass of milk into your hand at every meal and more so on spaghetti night. How then can I be allergic to milk???  I LOVE milk!

Apparently this love is unrequited. As my K-dramas would say, it is one sided.

When I finally gave up dairy, several things happened — my dry eyes were suddenly damp, my headaches disappeared, and sadly, I broke a rib. Damn you dairy allergy!  I can’t prove that giving up milk was the primary cause of that break. I’m sure tripping over a running beagle while running myself and flipping tush over tea kettle probably contributed as well…but I’m also sure giving up milk didn’t help the situation.

Since that unfortunate time, I have indulged time to time, I even let myself have butter and deal with the headache and dry eyes.

Now that we are in England, I indulge in scones with clotted cream (and several headache and allergy remedies). The one thing I refuse to do is have a large quantity of dairy. In my book that means no ice cream (really, who can stop at a tablespoon????).

This wasn’t really a problem in the US    Non dairy ice cream options abound. We even had shops that sold coconut milk ice cream to the masses!  On cones!  Totally legit.

Not so much here…

After a year of searching for ice cream in stores and bemoaning the cost and space needed for an ice cream maker, today I decided this strike had to end. Today I would have an ice cream cone.

As any self respecting 30 something would do, I promptly catalogued my supplies and checked the internet to make sure they were sufficient.

After assembling my ingredients in the small bag and the salt and ice in the large bag, I set about kneading the bag for 7-10 minutes. Or I would have, except after 2 minutes my husband took pity on me and took over.

This is where it all goes awry…

“Umm..we may have a problem,” says my nerdy software guy. This is not what I wanted to hear. I really didn’t want to see that the zipper had come undone on the inner bag and my glorious ice cream was rapidly mixing with the ice and Epsom salt 🙁

Did I give up?  Heck no!  I wanted ice cream. It’s been over a year!  So close!  At this point I looked desperately about the kitchen for two coffee cans of different sizes.  Tragically, I don’t drink coffee and the hubby mainly uses those little pods. Thwarted again!  Ready to give up?  I say nay!

Months ago, Thug Kitchen posted an ice cream recipe and did the most amazing thing. They put it in a bowl and froze it. What a novel idea!  Freeze stuff in the freezer. Why didn’t I think of that?

To ensure my ice cream wouldn’t just be a block of ice, I pulled it out ever 20 minutes and gave it a vigorous whisking. 1 hour later I indulged in a delicious scoop of chocolate cinnamon heaven.

For those of you experiencing a similar dilemma, and for others who may just want to try something new, I present to you my take on coconut milk ice cream aka chocolate cinnamon heaven.

1 can full fat coconut milk (hey, it’s good fat, deal with it)
1 heaping Tbsp cocoa powder
1.5 Tbsp sugar (I used Demerara but granulated or coconut sugar would be good. Honey would probably be awesome)
1.5 tsp cinnamon
1 tsp vanilla (mine is straight vodka with 10 vanilla beans aged several months, but no need to be fancy. When you go through so many bottles, it’s best to make it in bulk. Cheaper too thanks to duty free shopping).

Whisk all ingredients together until well incorporated. Place in glass bowl in freezer for 1 hour, removing and whisking vigorously every 20 minutes.

Once set to your preference, enjoy!  Store leftovers in a tightly sealed plastic freezer bag.

If you have any awesome coconut milk concoctions, let me know, it’s my milk of choice in the kitchen 🙂

Here are pictures of my attempts pre and post spillage and then final product. Yummy! 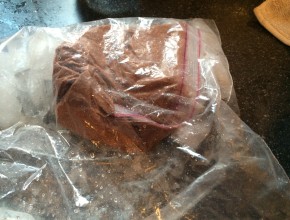 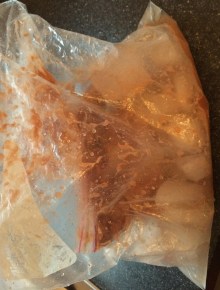 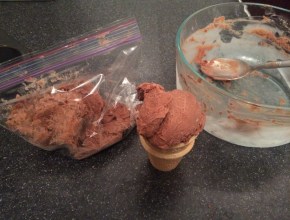